Improving Communication and Confidence with Mindfulness 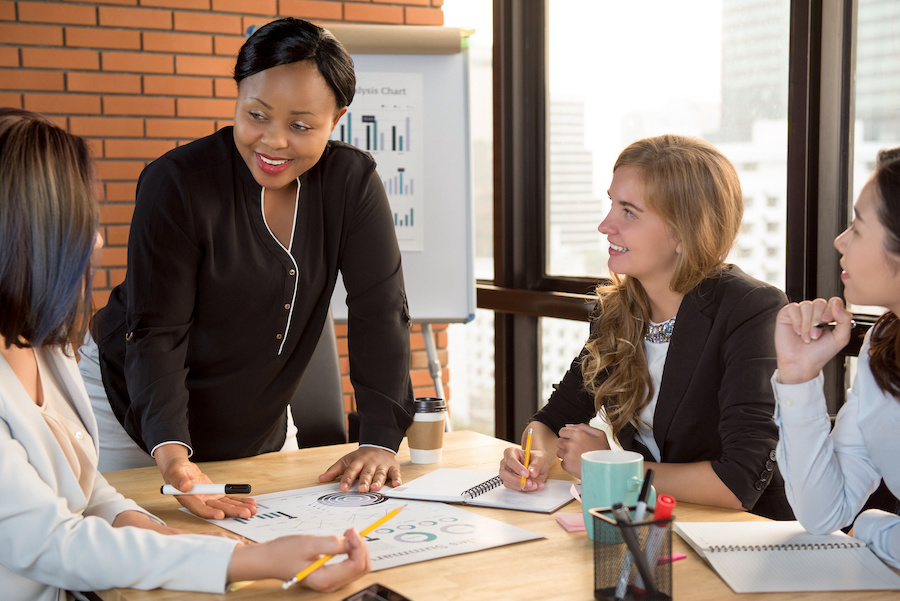 I can’t remember how many times I cried while driving home from work and beat myself up because I lacked the communication skills I desperately needed in my new job.

Back then, I was the new junior publicist for CBS Television Network in Los Angeles, hired because I had a college degree in broadcast journalism.

There were only three networks in those days – ABC, CBS, and NBC. I was the only minority publicist and also the youngest in my department at age 23. My colleagues were 40 and older, and they had all been in the business for at least five years or more and were skillful, expert communicators.

There was no training and certainly no college programs for publicity, so this job was baptism by fire; you were thrown into the high tide, and you either sank or swam.

I quickly felt myself drowning.

My job was to set up celebrity media interviews, photo sessions, college tours, parades, and talk show appearances. I was to travel around the country with the actors to make those appearances happen.

It required me to be an effective communicator to promote shows. I had to talk to stars on shows, their teams, press reporters, photographers, studio publicists, media, producers, directors, studio executives, and event coordinators around the country. Hollywood is a fast-paced world, and I had to get things done immediately.

I had no clue how to do this job. Every situation was unique, not to mention the different personalities and attitudes I would encounter.

We publicists were each assigned 10-15 shows. My very first sitcom was the classic sitcom “The Mary Tyler Moore Show.” I was fortunate that Mary and the co-stars were kind and considerate, knowing I was so green. However, I ran into some difficult people on other shows.  Millions of dollars are invested in television episodes. Dreams are made and crushed with the success or failure of a show. Publicity is crucial.

I was not only starstruck in those days, but also tongue-tied to the point where I sometimes stuttered when I asked actors to make public appearances and interviews. Talk about embarrassing! I cursed myself for not having confidence.

How Insecurities Can Block Communication Skills

Having tagged along with a couple of my colleagues on their shows to learn my responsibilities, I saw how easily they communicated with actors, engaging them in conversations and even making them laugh.

I felt stupid most of the time. Why couldn’t I do that too? Words eluded me. After crying on my way home some days, I binged on sweets and drank wine. So now I had hangovers on top of low self-esteem.

I was so filled with doubt that it took me forever to do the one thing that got me hired. I struggled writing feature stories for the press about the actors and the shows. Often I was at the network trying to crank out a story until 11:00 PM, long after my co-workers were relaxing in their homes.  The cleaning crew, which I knew by name, worked around me.

I couldn’t continue on this trail of doom; I had to do something. I felt like quitting.

Using Mindfulness as a Communication Tool

These insecurities led me to try yoga and meditation to help me relax. It helped, but still, words and the right conversations eluded me when speaking to these high-powered Hollywood folks. I even enrolled in Toastmasters, hoping that would help me.

My efforts made me somewhat better to an extent, but I needed an instant stress releasor. I couldn’t sit on a cushion, close my eyes and meditate to answer my boss in meetings about publicity on my shows.

One Sunday, there was a guest speaker at my church. A beautiful Japanese lady, Eicho Michi, a professor of Eastern Religions and Practices at the University of California (UCLA). She announced a meditation weekend retreat specializing in the practice of mindfulness. Back then, mindfulness was not heard of, but that didn’t stop me. After listening to her talk about the benefits of this ancient practice, I immediately signed up.

On the retreat, I found myself learning mindfulness, and I knew I had to live the rest of my life practicing. I learned to listen and tune into my thoughts and emotions. I realized that it was me that was keeping me from communicating effectively.  It was me who had the

disparaging thoughts that filled my head, keeping me stuck.

I had no clue I was tearing myself down and how my body was responding with stress and tension. It was me that blocked the right communication with others because I was focused on failure.

Mindfulness helped me to tune into my thoughts and listen to others. I became a better listener to what my colleagues shared about the business, and I even got the courage to ask different co-workers for their advice on handling work issues. They took me under their wings and loved to teach me what they knew. Eventually, under their tutelage, I evolved into the confident publicist I longed to be.

Mindfulness practice allows you to be aware of your reactions to others and shift back to the present moment by noting your feelings without judgment. You then feel a spaciousness, allowing you to relax, which helps others to relax in your presence too.

This present moment awareness helps you harness the qualities of interpersonal mindfulness.  You can then shift into empathy, compassion, and connection to others. Effective communication then easily flows. It did for me.

Since those difficult, challenging days in Hollywood, I have worked on hundreds of episodic shows, and with iconic celebrities including, Lucille O’ Ball, Carol Burnett, Betty White, and on classic shows like “Good Times,” “The Jeffersons,” “All in the family,” and “Roseanne.”

Today, I see many shows that I promoted on Netflix and Hulu and other streaming services.  I think about how they led me to mindfulness. This practice taught me how to communicate by listening to my thoughts and listening deeply to others.

I learned to welcome all of my emotions instead of pushing them away. Mindfulness showed me they are our messengers, including our fears and insecurities.  They told me to do something instead of giving up. Go to meditation, yoga, speech classes, and ultimately to practice the tool that helped me to communicate… mindfulness, which I teach today.